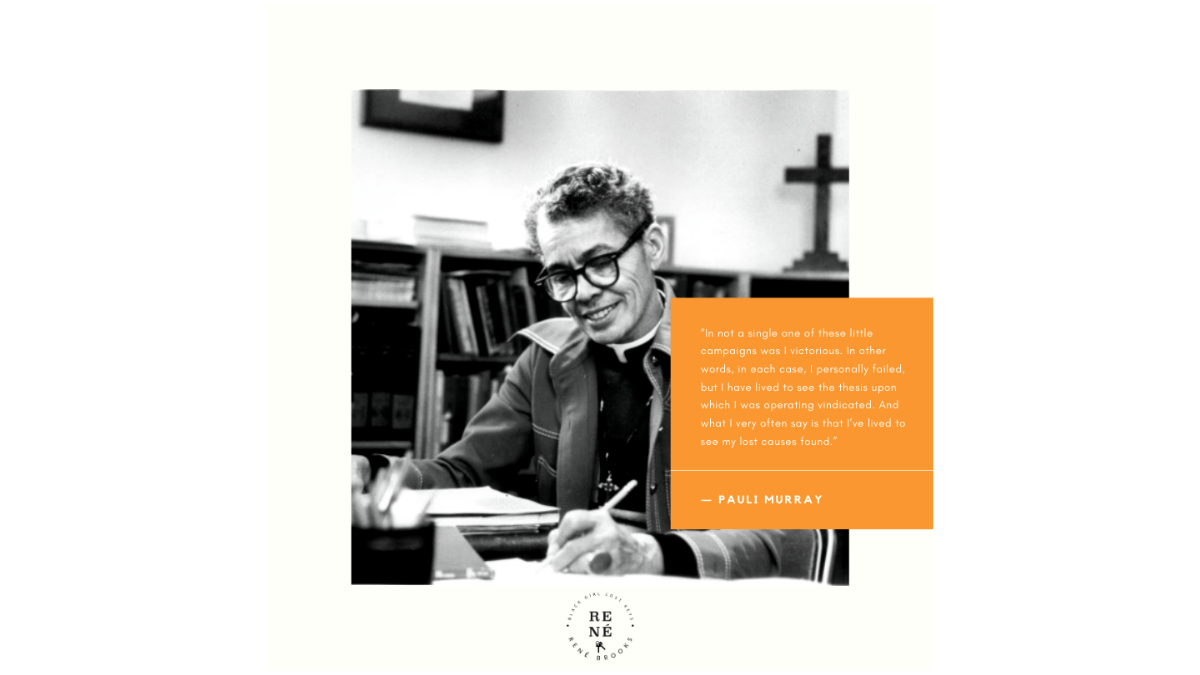 The Women Who Led Me Home will highlight 9 of the women whose stories I drew strength to pull myself out of a deep depression over the course of each Sunday in Black History Month and each Sunday in Women’s History Month – because we are not just black, we are not just women, we are both. I wanted this project to honor the sacred intersection of blackness and womanhood.

Our first woman’s story is so incredible that I cannot believe it is mostly unknown.

If you are able to attend an integrated school, you might want to thank Pauli Murray, the Queer Episcopal saint who wrote the thesis that Thurgood Marshall borrowed from to win Brown vs. The board of education. But you’ve never heard of her, so you couldn’t before today.

“The Rev. Dr. Pauli Murray (1910 – 1985) was a nationally and internationally known advocate for human rights and social justice who grew up with her grandparents Robert and Cornelia Fitzgerald on Carroll Street in Durham. In 1977, at age 66, she was the first African American woman to be ordained an Episcopal priest, offering communion for the first time at Chapel of the Cross in Chapel Hill where her grandmother had been baptized as a slave. “ (https://today.duke.edu/2012/07/saintmurray)

I first heard of Pauli Murray in 2016 while working in a soul-sucking job at an insurance company, and listening to podcasts to keep me entertained. Stuff Mom Never Told You, a fantastic podcast, highlighted Murray’s life. She was a woman who lived life exactly how she wanted to lead it. They wouldn’t let her into school? She fought them. She married a man and realized that being men wasn’t for her, she annulled it. She dressed up in men’s clothing and documented herself as “The Dude.” Every rule and convention said she couldn’t exist in that form but there she was, existing. Conquering every challenge they laid before her. Creating the space in which she could function freely. Redefining what it meant to be a black woman, who she said fought Jim AND Jane Crow to illustrate the role that sexism played in oppressing black women as well.

At the time I was in a relationship where I was frequently expected to conform hard to gender roles. When I indicated to a group of women at my church that my partner at that time both cooked meals and did laundry, they asked me, shocked “well what do YOU do?” They couldn’t see the value I would have in a relationship beyond cooking and washing clothing. Every woman I sought for advice at that time said something similar, that I should serve him and be grateful that I had a partner beside me at all, even if it didn’t feel like a partnership to me.

It was in this place that Pauli spoke to me. Learning about her life, based around her doing whatever the fuck she wanted to do because she could, helped me renew my determination to be myself regardless of the consequences. Here was a woman who died the year after I was born who found feminity in more than dresses and dishes and thank you cards. She did incredibly important work that she loved, work that changed the lives of the very women who thought I should be subservient and grateful. Pauli reminded me that I wasn’t broken, that people who would shove me into a mold in which I didn’t fit were. And I began to break the mold.

Pauli Murray, I thank you for showing me the pathway to femininity on my own terms.

Thank you for leading me home.

Survival as an accomplishment

When you hear about black women, so often you hear about strength, but I think the better word is we survive. In our day, as it was in Pauli’s, to survive is still an accomplishment. What a terrible shame.

Surviving is not necessarily a joyful existence. It is a bearing up under, it is enduring, but not a joy. We survive discrimination. We survive sexism. We survive racism. Yet the toll to our mental and emotional health is obvious.

When do black women get to take survival for granted and move on to the next phase of building the full and contented lives we deserve?

At the point in my life where Pauli’s words were able to reach me, I had been on the verge of just giving up. Repeated failures can grind against one’s soul and leave you feeling as though your goals are truly unattainable. As we know, the only true way to guarantee you’ll fail is to stop.

All it takes is one person

I’m a Millennial, but I’m on the older end of the generation, so I have experienced a typewriter. The hum of the machine, the smell of the ink, the jolt that runs through you as each key strikes the paper. There is no easy way to remove the words from the paper once they are there, so unless you want to spend a lot of time on difficult corrections, you’d better type what you mean.

What hasn’t changed is the power of the written word. Today, our messages go out on a continuous loop and can reach the world at the tap of a key. We are creating movements that reach out to the most vulnerable in their isolation and bring them back into the fold of humanity.

All it takes is one person

Being our full selves

We really like to categorize people. It keeps them firmly in their place, and lets you know what to expect from them. No fear or vulnerability necessary, you know what’s next.

Because of this propensity to categorize, we often fear people who can be more than one thing at a time. I do not show up in the world neatly. I am neither black nor woman. I am both, and therefore am in a unique position to live in both worlds while often being mistreated by both those who share my race and those who share my gender.

I appreciate Pauli’s refusal to fall neatly into one or the other. We cannot split ourselves, we can only be who we are. Here’s to being our full selves.

The more things change, the more they stay the same. Pauli Murray passed away in 1985, the year after I was born. Still, we see the labor of black women being used by the voices of those same black women being silenced. Black women are building platforms, creating businesses, and networking together to get the job done. Let’s continue to refuse to go unheard.

Pauli has the final word

Thank you for reading The Women Who Led Me Home. Each piece will appear on the Sundays spanning Black History and Women’s History Month to highlight the intersection of femininity and race. To read the next woman’s story, please click here.