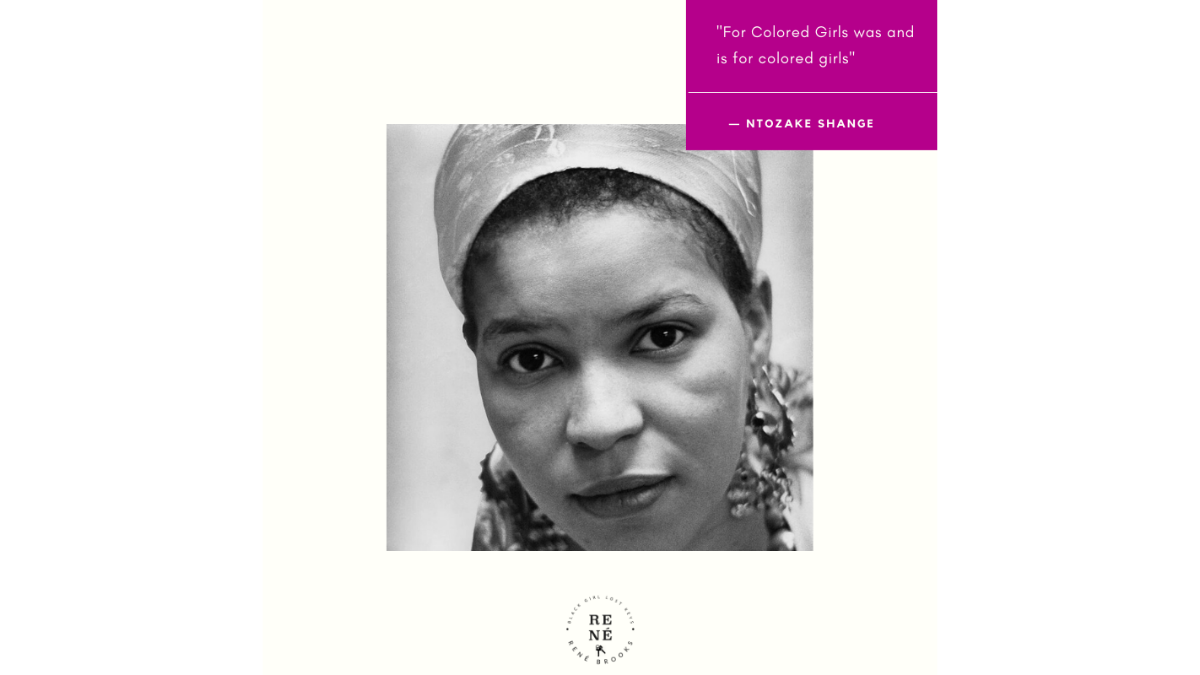 Ntozake Shange laid the foundation for my womanhood

Ntozake Shange’s work is epic. That is why she is a treasured name on the list of The Women Who Led Me Home, Black Girl, Lost Key’s first Black History Month Project. It is the story of how these women’s words led me out of a deep depression I suffered from 2013-2016. I’m grateful for the words of each of these women, I believe they all taught me valuable lessons that I would not have learned were it not for them.

As I researched for the words to describe the indescribable poet, feminist, powerhouse, Ntozake Shange, I came across a quote of hers I have never heard, that feels so relevant, even today:

“The reaction from black men to for colored girls was in a way very much like the white reaction to black power. The body traditionally used to power and authority interpreting, through their own fear, my work celebrating the self-determination and centrality of women as a hostile act. For men to walk out feeling that the work was about them spoke to their own patriarchal delusions more than to the actuality of the work itself. It was as if merely placing the story outside themselves was an attack. for colored girls was and is for colored girls.” – Ntozake Shange

Ntozake Shange was born Paulette Williams into an upper-middle-class African American family. Her father was an Air Force surgeon and her mother a psychiatric social worker. Cultural icons such as Dizzie Gillespie, Miles Davis, and W.E.B. DuBois were regular guests in the Williams home. Shange attended Barnard College and the University of Southern California, earning both a BA and MA in American Studies. Shange’s college years were difficult, however; frustrated and hurt after separating from her first husband, she attempted suicide several times before focusing her rage against the limitations society imposes on Black women. While earning an MA degree, she reaffirmed her personal strength based on a self-determined identity and took her African name, which means “she who comes with her own things” and she “who walks like a lion.” Shange would go on to a successful triple career as an educator, performer/director, and writer whose work drew heavily on her experiences of being a Black female in America.

Shange was perhaps most famous for her play For Colored Girls Who Have Considered Suicide/When the Rainbow Is Enuf (1975). A unique blend of poetry, music, dance and drama called a “choreopoem,” it “took the theatre world by storm,” noted Jacqueline Trescott in the Washington Post, as it “became an electrifying Broadway hit and provoked heated exchanges about the relationships between black men and women.
https://www.poetryfoundation.org/poets/ntozake-shange

I will never ever forget the first time I encountered this work. This punch in the gut. The pureness of the homage. The variety of experience. This was the story I had been waiting to hear. To have this deposited into me as a young woman laid the foundation for me to understand what it meant to survive in this world as a colored girl, and to know how important it was and is to flee from bad relationships.

It became clear to me that I was in a bad relationship. I had been called a bitch, had my things broken and destroyed, holes punched in my walls and threatened.

Thank you, Ntozake for reminding me of the resilience of Black women, and our collective power to heal. Thank you for leading me home.

Sweetness at any cost

I’ve often wondered if the problem society seems to have with Black women doesn’t stem from the fact that we are taught to shoot from the hip. This disarms people. It either charms them or it pisses them off, and you never know until it is too late which one is going to happen. When you’re in the habit of being such a person, you become used to your ideas and thoughts being dismissed as nagging. If you can devalue genuine thought and reduce it down to mere complaints, you can trivialize it to the point where no one is listening anymore. These words for me have always represented the shrinking down that black women and girls are taught to do in order to reduce- but never succeeding in stopping- the onslaught of abuse that we will have to bear. Yet we’re still trying not to leave bitterness in anyone’s cup.

The power of your word

Everyone has heard a word that changed everything. A moment where you knew that no matter what happened you were absolutely not going back to what had been before the words were spoken. I grew up in an environment where words were often used as weapons, and I was determined that my own home wouldn’t be such a place. Yet it devolved into one. And as the words devolved, so did the quality of our lives. Everything began to reflect the ugliness of the words. I learned to be more careful with my words than I thought I could be. I learned to repair the holes that were left in the walls but the holes in me gaped open for years. And those words continued to echo in the spaces I couldn’t reach. It was only time, change of scenery, and therapy that began to close those holes up for good.

Cheated out of kindness

After you survive a trauma like domestic violence or sexual assault, being kind becomes difficult. You’re never quite sure when you meet someone new if they’re going to flip a switch and become someone who you never realized they could be. Instead of blaming their behavior, you blame niceness. You resent every indication that you ever showed your abuser any kindness and you hate to think that it could happen again. So you toughen up. You close your heart off to new experiences with people because you don’t know what it is like to trust and not have it taken advantage of. So you treat it like a rip-off, a joke, and a set-up. It takes so much time and healing to get back to the point where you can interact with people kindly without fear.

Navigating as only we know how

How I navigate the world as a black woman is never far from my mind. Partially because it is my job to tell you all what it is like. But I think the part that so often gets lost in translation is how unappreciated and unloved we often feel. How it seems like all anyone wants from us is to shut up, clean up the mess, and move on with no thoughts or feelings of our own. Not only is it painful, but it also fills me with a slow-burning rage. Yet in all of it, I have often reflected on this line and how I have learned the value of my love. It just takes time to decide who to share it with.

Loving the wrong person can cost you

One of the most valuable lessons a woman can learn in life is the very high cost of loving the wrong man. I see it not only in literature but in the lives of women I know, in my own life. We are taught to give, but we don’t know much about taking and we can’t see until it is far too late just how much we have sacrificed until our original selves are all gone. It’s important for us to know the red flags, the warning signs, the proposed compromises that are too much that will keep you from realizing your own potential. It can be learned, and we can keep ourselves safe.

Now we let Ntozake speak for herself.

Thank you for reading The Women Who Led Me Home. Each piece will appear on the Sundays spanning Black History and Women’s History Month to highlight the intersection of femininity and race. To read the next woman’s story, click here. To start the story from the beginning, click here.

To read For Colored Girls for yourself, head here: https://amzn.to/2HtgHjJ (affiliate link)